To “Mantle” one's Coat of Arms, is to have the symbol of a drape or cloth applied to the Crest (forming a back drop). Mantling was a common “Achievement” for Knights. Mantling was placed in such a way so was to flow downwards from the Arms Holders “Helm” (normally placed in the portion of The Shield called “The Honor”. The Mantling developed from the heavy robes worn by Knights in battle (as a way to help defray enemy blows). On a Coat of Arms, it was commonly seen as a symbol for having been in battle. 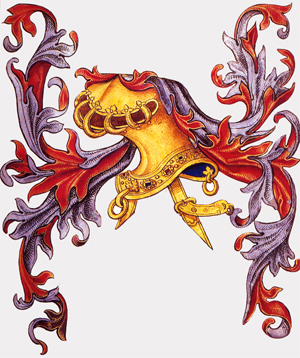