The Manica was a protective armor component piece designed in the 1st Century B.C. to help protect a "specific" arm of the wearer. Made of iron or bronze plating (segmented and adjoined by rivets or wire hinging). They would be worn by multiple leather straps. Popular among the Gladiators, (and later by soldiers), the Manica was designed to be worn on one arm. Originally thought to be used by Roman cavalry, the Mancia would worn on the "reign arm" of the rider. This provided protection from enemy attack (by injuring the reign arm, a rider could not ride). Other theories were that the Manica protected the sword or weapon arm of the user.  It took 35 pieces of metal to construct  one Manica. It provided a moderate range of motion with regards to arm movement. It was also useful with the Parma Shield. At least one documented military campaign recorded had the widespread use of the Manica, this was The Revolt of Florus and Sacrovir in 21 A.D. 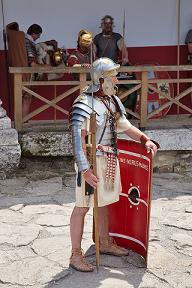