Richthofen is credited with an impressive 80 confirmed kills – this earning him the nickname “Ace of Aces”. Founder and leader of the infamous German “Flying Circus” (so named due to the bright colors he and his fellow fighters painted their aircraft). Serving originally as a Cavalry Officer, he joined The Imperial German Air Force in 1915 (as an Observer). Eventually under the guidance of German Fighter Ace Oswald Boelcke, Richthofen became a fierce fighter in his own right. His flying ability earned him the chance to flying more experimental and prototype aircraft (better than he would have been able to if he was a regular Pilot).

His exploits were also the subject of possibly the first military propaganda campaigns used by Germany. His nickname given to him by The British was “The Red Baron” (in regards to his bright red Albatross fighter). Richthofen was also credited with downing the first British Air Ace, Major Lanoe Hawker. This would make him the number one prime target for British fighters. Winning not only The Blue Max Air Medal, he was also one of the few to earn The Order of The Red Eagle and several Iron Crosses. In 1918 (over France), he was in flight when he was hit in the chest by enemy fire (crashing). Medical examination stated that Richthofen was killed instantly from the shot.

The matter of mystery comes from just “who” was responsible. Being pursued by a Royal Canadian Pilot (who claimed the kill), this has been seriously debated (and not just by The Germans). A theory that he was hit by ground fire was even put forward. Regardless, Richthofen died at 25, truly “The Ace of Aces”. 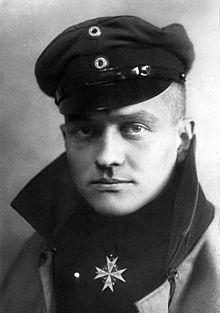