Created in 1818 on behalf of King George III, The Order was designed to honor Common and Nobility from The Isle of Malta – for their stand during The Napoleonic Wars. Later, in 1864 – The Order was extended to the People and Subjects of Greece. The Order incorporated both Men and Women (even allowing Women to hold the position of “Dame Commander”). The insignia of The Order is a Silver Star with Cross (on a Blue Field). The image of St. Michael crushing Satan is seen suspended. The Lion of St. George is featured as a border. The Order is still considered active (secularized). 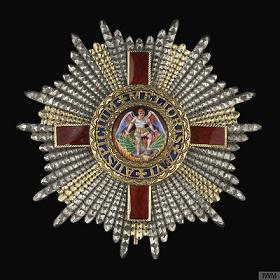