The Classification of “Male” Tank (or Armored Vehicle) was used to denote a tank that was armed (equipped) with cannon. Cannons (of various calibers), were “side mounted” on metal (iron) extensions, positioned on both sides of the Tank (normally in between the track assembly). 6-pounder cannon were the normally excepted range in firepower. Smaller, “lighter” Hotchkiss Machine Guns (no more than 3), were also introduced as anti-personnel offensive/defensive weapons. These classes of Tank weighed around 28 to 30 tons and crewed 8 men (to both drive and use the Tanks weaponry). Many Allied and Imperial German Tanks “Squadrons” incorporated “Male” Tanks. In length, an average “Male” was 33 feet long with a 15 foot width. The interior was 8 feet high. Armor was “almost” 1-inch thick. “Males” could withstand most small arms fire and small shrapnel, but were not all too effective against a direct or glancing artillery shot. 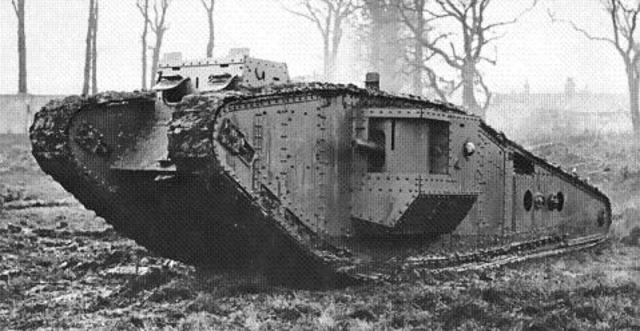