Seen around the 5th Century B.C. - The Makharia Sword was a battle sword seen in wide deployment, not only by Greek Warriors, but Persian as well. An early “relative” of the European Falchion, The Makharia Sword was idea for Cavalry (or mounted) – deployment. It may have well been the “first” example of The Saber. Although retaining some design features of the popular Xiphios Sword, The Makharia was around 3.5 feet long. Made of a hammered bronze/copper composite, the blade had a slight curving at the upper most portion of it's body. In addition, the blade featured the traditional “widening” of the upper body (as is common with Ancient Greek swords).

Very sharp, although it was also a single-edged blade, the inner portion of the “Upper” blade curve was usually sharped as well. This allowed The Makharia to be used effectively from different (and sometimes awkward) – positions with the User was “on horse”. The Copper handles were around 5-inches long and were typically wrapped in wet leather (which would dry to a hardened grip, of sorts). It has been debated if The Makharia was actually carried in a scabbard by The Greeks. Some examples are seen on Persian earthenware. 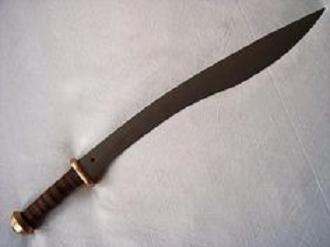