Although the wearing of a Coif (both male and female), goes back well into the early Middle Ages as a form of fashion. It was no stretch that they would find their way into Medieval armies as well. Although the use of The Pixane Mail was known, the need to cover the entire head with protection not as heavy or bulky (such as a helmet), developed the Mail Coif. A large piece of standard Chain Mail had an opening to slip over the head (completely covering it). Another opening was made for the face of the wearer. This opening covered the ears and neck effectively and gave the wearing all necessary mobility. Mail Coifs could be used with other armor components (as well as helmets). Often worn by itself, it became popular among foot soldiers (as possibly their only for of protection). The Military Coif would prevail into the 14th Century. 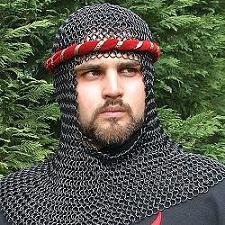