The “Mahdist Wars”, also known as The Sudanese War of 1881-1899 was fought between The British Empire and the radical Religious Forces of The Mahdi (Muhammad Ahmad). It was Ahmad who proclaimed himself The “Chosen One” or Redeemer of The Muslim People. He told his followers that he would convert The World to Islam and kill all who did not convert. A large percentage of Tribes located in The Sudan, Northern Egypt and Africa formed a proper Army. After the fall of the major Port Sudanese City of Khartoum (including the death of British Governor General Charles Gordon), Great Britain again committed her Forces to yet another “Colonial War”. The British People were wary. The Anglo-Zulu Wars, The debacle in Afghanistan – all made any Conflict outside of England very unpopular. The Sudanese War would last on and off for nearly 18 years.

The Mahdist Forces, like all other Armies, identified themselves in battle with Flags as well. The basic color scheme of the Flag Field was based on primary “Worship Colors” used in Islam. These were Red, Green, White and Black. Other colors, such as Yellow and Blue – were Tribal Identification.

Since no image of Allah or Muhammad The Prophet could be used, various Religious quotes from The Quran were used. These were stitched into the Flag and normally arranged in “stanzas” of 3 to 4. These passages were normally set against a white or tan background. They were carried on Foor and on Horseback on traditional Flagpoles. 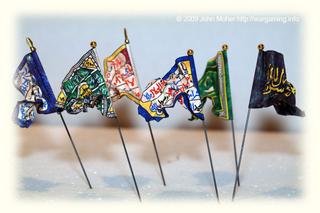