Dating to the 9th Century AD in The ''Kingdom of England'' – The Magnum Concilium (''Great Council'') was a Governing Administrative Body (mostly Noble), who had leave to discuss matters of State with The King or Queen – as it related to The Church. The Concilium would (in time) evolve into The House of Parliament (the current Political Body of Government in The United Kingdom).

Matters of State and Church were often codified into Law (secular), as a result of The Concilium. Although disbanded in the late 12th Century AD, a form would be resurrected by King Charles I in 1640 AD, as a result of His dissolving Parliament (English Civil War). The King planned on using the ''sworn loyalty'' to The Crown – given to by The Concilium to their Liege. As early as 2008, several British Politicians tried to establish a form of Concilium (however, this was heretofore banned by an act of The House of Lords in 1999). 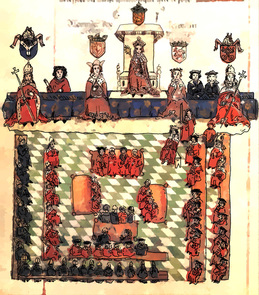