Seen as the foundation of The English Constitution (law and liberty), as well as the future “cornerstone” for other documents “of Freedom” - The Magna Carta (translated to “The Great Charter”), is one of the most well known and important documents in English History. Based on the Medieval “Contractual” idea that a Feudal Lord (as a King or Queen) – has certain obligations to his “Vassals” (Subjects). They (his Subjects), have the right to “force” their Liege to fulfill those obligations. In short, it established that The King (as the Subjects he ruled) – were “subject to The Law”.

Needless to say, this was NOT a popular notion for a King or Queen (who ruled with “Divine Authority” and were NOT subject to “common” law). In 1215, (due to his mistreatment of his Lords and Kingdom), King John of England was forced to sign the document known as The Carta (and drafted by his Barons) – at Runnymeade (near Thames). The Archbishop of Canterbury “”presented” The King with the document. It took MANY months of rewriting and negotiations. There WAS a precedent for The Magna Carta. In 1100 A.D. King Henry I issued “The Coronation Charter of Baronial Liberties”. This gave his “Barons” certain rights and “”safeguards” that King John wished to “overlook”. The “Liberties Charter” was very specific with regards to financial obligations, rights and liberties with The Church, The Royal Court and Treasury – and the “all important” future relationship between The Barons and The King.

The Barons now felt that King John had “dishonored” The Charter. A “new” and more “pressing” one was needed. Hence the creation of The Magna Carta. In The Carta, King John made concession to every faction that had a complaint against him. He “swore” that The “English” Church would be free to worship as it saw fit (without his interfering). John “promised” to respect the rights and liberties of his Nobles. He even went as far as to “declare” that The City of London was now a “Tax Free” area! Other areas “sworn and attested to” were unreasonable taxation, no undue torture or punishments metted out, and respect for his more “Common” Subjects. The Barons even included the prospects of “peace” with Scotland and Wales and the establishment of fishing rights.

The most import “provision” of The Carta was the creation of a Board of Barons (“The Council of 25”) - who would “oversee” as an “Executive Committee” of sorts. Naturally, King John refused to honor ANY of his concessions. He had been willing to agree to anything to stop another possible “Baron's War”. Pleading to The Pope – he allowed John to “freely negate” The Carta. This would create an instant rebellion in England, as (once again) – The Barons prepared to (this time) remove The King. John got lucky, He died in 1216 before actual “hostilities” broke out. His Son, (still a Child) Henry III was placed in the Regency of Nobleman William Marshal. Under his “wise” care, Henry III would grow up respecting his Nobility and Kingdom far more than his Father did.

In 1225, the finalized Magna Carta became “Law”. In 1297, King Edward I attempted to break the Carta (with similar results experience by his Grandfather John). Forced to reaffirm The Carta, in 1399, The English Parliament would use The Magna Carta to justify it's “forced” abdication of Richard II. By The “Tudor Era”, The Carta was almost forgotten. It was brought “back into the Light” during the conflicts between The Stuarts and The Commons (otherwise known as The Commonwealth Era). 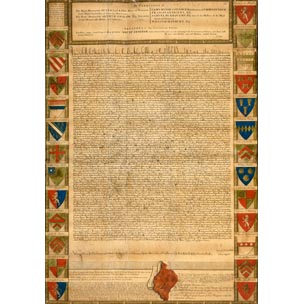