Magazines ares as old as gunpowder and cannon. Simply, a Magazine is a storage facility or structure designed to hold gunpowder and ammunition – to be used by Artillery. Designs of these areas were based on need, location and above all – speed with which to effective maintain resupply to a Gun or it's crew. Traditionally, in cases of Coastal Defense Forts, one can see the development of Magazine more quickly. Often made of concrete, they were recessed into the ground (to help keep powder dry and cool for use). Shells were kept nearby (due to lack of self contained shot and percussion caps).

Often “Shell Hoists” (specially designed winches that would lift heavy shells for tube placement) – where near. This allowed a Gun crew to “serve” their weapon and get a continuous flow of ammunition and powder (all pre-prepared, of course). Often earthworks were erected around Magazines (as a precaution). Many were quite elaborate structures which had underground access as well. With the advent of larger caliber weapons (meaning more powder and heavier shells), the installation of mechanized pullies and winches were created to better assist in the loading of these “bigger” Guns.

These innovations would be incorporated into Naval Ships as well. In their case, their Magazines were many decks below the actual Gun. It was impossible to compensate the massive weight of many of these shells and powder charges. Mechanical elevators and lifts (first seen in the Coastal Defense designs), would be used (and still are today). Of course, the most common problems with any Magazine (then or now) was fire. A spark could not only destroy a Gun (or Battery) – but cause catastrophic damage to a Fort or Ship (if an explosion were to occur). 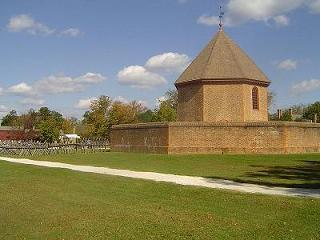