The 15th Century Title of “Madame Royale” was devised in France. It was used to identify the unmarried eldest Daughter of a King (and later Queen). Although one could easily apply the term “Spinster”, such was extremely crass in usage, and was often only reserved for “Commoners”. The Madame Royale was referred to as “Her Royal Highness”, regardless. Many reasons made an unmarried Royal Woman a “Madame Royale”. Some had nothing to do with the fact the “she” could (or would not) be married “off” by her Father or Mother. In some cases, it was simple politically advantageous to NOT married off an eldest Daughter. “Beauty” and “Dowry” were not always the case. In England, a similar Title of “Princess Royal” existed in the 17th Century. The last example of Madame Royale was in 1844 with Marie Antonie of Angouleme (the daughter of the last surviving daughter of French King Louis XIV. 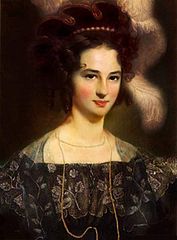