At one point in the Ancient World, The Macedonian Armies of King Phillip - and later his Son, Alexander - was The World's most powerful. From 808-146 BC, The Macedonian Army was a model of tactics and discipline. One of the most Elite of Macedonian Units wad The Hetairoi or "Companions". They are often considered one of The World's first "Shock Troops". So named, because of their fast and crushing assault on an Enemy Front. Starting out as only the most loyal (and often of Noble birth), the Men of The Hetairoi were originally Palace Guards to The Kings of Macedonia. Naturally, they were adept Horsemen. This skill was later honed into their particular battle skills.

Given only the best Horses and Weapons, their primary weapon was The Xyston Spear (a short, 3 to 4 foot Cavalry Spear). The Kopis Sword was actually used as a secondary weapon. Armor was of The Linothorax style, as was The Boeitian (enclosed) Helmet. Traditionally, Hetairoi did not carry Shields. They operated in Troops of 100 to 200. It was under Alexander that their true fame came into History. Personally commanded by him, they perfected The "Wedge" Formation. Seen as the "Tip of The Spear", The Hetairoi would smash into an Enemy Front and exploit an opening. This would be exploited by Phalanx Infantry.  With the eventual demise of The Macedonian Empire, the traditions of The Hetairoi would continue - as the later Cataphract Cavalry. 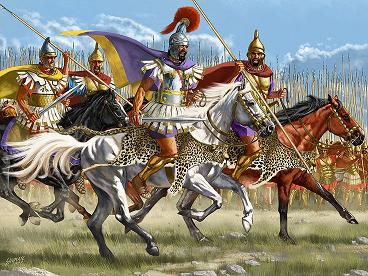