While Roman Boys wore the previously discussed “Bulla” as a symbol of their childhood – so too did Roman Girls have their own form of identity of youth. This was an amulet/necklace known as The Lunula. Not as flamboyant or large as The Bulla, these were small crescent shaped pieces of jewelry, given to a Roman Girl not long after birth (among The Wealthier Classes). They were normally made of engraved Silver alloy, and affixed to a necklace. The style of the necklace ranged from simple to very elaborate.

Much like The Male Bulla The Lunula protected a young Roman Girl from perceived sexual immortality. She would have to wear The Lunula until she was married. At that time, she was to remove The Lunula and “cast it away, among her other childhood possessions”. In this, a Roman Girl was seen as a Roman Woman. Commoners too emulated The Lunula for their young women as well. Made of much simpler materials, Lunula’s of The Commoner Class became heirlooms – often passed from Mother to Daughter. 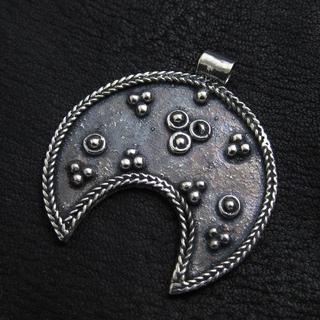