A popular form of Roman Armor, the Lorica Segementata consisted of thin iron or metal plates (girth hoops), fastened with internal leather straps. The metal plates were soft iron (inside) with slightly harder steel (outside). This innovation in design was able to withstand battle damage without becoming brittle. This was a first (and successful) attempt at "case hardening". The process involved enriching the iron with carbon from organic sources packed tightly around the piece (which would then be heated in a forge). The metal strips were arranged horizontally around the body (overlapping downwards). Often, shoulder plating (constructed the same way, only larger), would be attached. A modified form of breast and back plate could also be incorporated. Often connected with leather straps, tie hooks, tie rings or buckles (sometimes made of brass).

Debates on just what type of troop was authorized to wear Lorica Segmentata. Many feel that it was the preferred wear of The Triarii (Heavy Infantry). It was probably a fair bet that the armor went to first line, veteran troops initially. This type of armor was not seen much after the 3rd Century A.D.  The Medieval Almain Rivet Armor is a direct ancestor to the Segmentata. 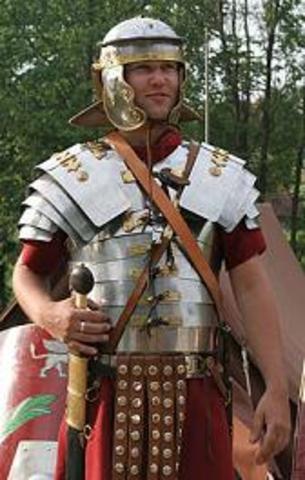