As we have previously seen, The Legions (Armies) of Ancient Rome used a wide category of Armor and Armor components throughout it’s long History. One other type of Armor used, was known as Lorica Plumata. This Armor was worn only by the most wealthiest of Officers, mostly in the Rank of Tribune and above. The term “Plumata” was not used by Rome with regards to thus type of protective wear, with it’s actually name list to time. The use of the word derived from Historians in the 17th Century to so describe this type of Armor.

Plumata Armor was composed of hundreds of small Scale-like pieces that were shaped to resemble the feathers of a Bird. Assembled in layers, it was very expensive and time consuming to produce. The layers were connected by hooks or rings. Often, individual pieces were even engraved with lines to further resemble a Bird’s feathers. Normally only Tribunes and above could afford them, and it us thought that it wad worn to both inspire one’s Soldiers, and impress one’s Enemies. Variations are seen with full Breast and Backplates, as well as complete Base Skirts. The style would become very popular during The Imperial Period and carry through into Byzantine Military Culture, as well. 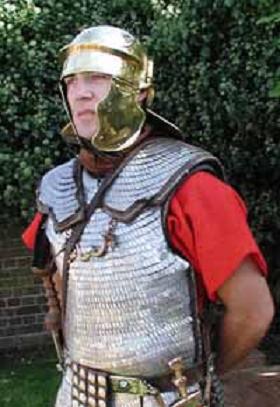