Raised in 1642 in support of The Parliamentarian Cause, this English Civil War Flag was used by Lord Brooke to rally his Warwickshire recruits. The purple color of the Flag was to reflect the purple coats worn by his Infantry into battle. Twin White Stars were placed in the Center of the Field (their exact meaning is unknown). As with both sides of The War, The Cross of St. George was placed in the Upper Left Canton. At it's height (1643), some 850 men were serving with Brooke's Foot. The Unit fought in The Siege of Warwick Castle. They were disbanded also in 1643 (after the 1st English Civil War). 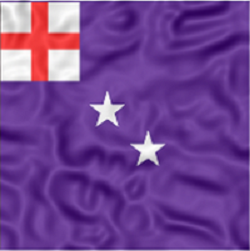