The pinnacle of Norse Naval construction, The Longship was the primary vessel for Norse exploration, trade and warfare. Development began in the 6th Century and would continue in basic construction design well into the 13th Century. Typically long and slender, there were 4 known classifications of Lonships. Karvi, Snekkja, Skeid and Drekkar. These each served a different functional purpose for The Vikings. The most known to history were The Skeid. These were the typical warships most often used in Viking Raids and Naval engagements. Both wind and human powered, a typical Skied held placed for 30 Oarsmen. The ship was around 100 feet long (with some examples reaching 130 in some cases). Typically featuring 1 Main Mast, The Skeid could carry around 50 warriors.

Initial designs showed that the Longships were held together by rope and waterproofed by mud and fat compositions. Nails (when used) were an advent of trade with other Kingdoms (or when a crew overtook and captured another vessel). Soon an overlapping planking technique was developed which would cease the use of any “natural gluing” methods. Ship hulls were known to be very strong. Although not used for ramming, a Longship could still serve a similar purpose. Pine, Spruce, Ash and Elm were all good strong choices for construction. A typical Longship Main Mast stretched some 52 feet high. The Longships also included a rudder system for steerage and navigation. Anchoring involved the cleaver use of “Y” shaped Yew Wood (attached to rope). The theory was to ensnare an underwater obstruction and anchor in this fashion. Every Longship carried emergency “construction tools” for repair. The Longship was truly an early innovation in both ships and seamanship. 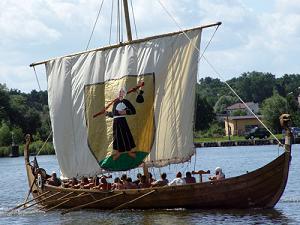