The Lollards were a group of English Reform Advocates of The Church whose ideas stemmed from “popular” Reformist John Wycliffe. The Movement grew is some popularity in 1387 when “The Great Schism” further discredited The Catholic Church. By the 1400s, The Movement was persecuted and driven “underground”. They helped to contribute to The English Reformation of the 1500s. Their “Manifesto” of beliefs, called “The Conclusions”, were presented to Parliament in 1395. They condemned Clerical celibacy, the Transubstantiation and The Sacraments.

They approved of “poverty” among Priests and a Countrywide “official” translation of The Bible into English. Some Lollards embraced “Free Love” (or disownment of Marriage). In 1401, Parliament issued it's “Heresy Laws” (which included a death penalty). Many Lollards were executed (burnt at The Stake). The Lollards in turn, attempted several revolts against The Church and Crown (which ended in grisly torture for most Lollards). The most “famous” of these was in 1414 against King Henry V.

The King all but crushed The Lollard Movement. Some survivors fled into Northern England (working as Anarchists against The Crown). Their continued teachings however, continued to weaken The Crown (among it's Subjects), and would create the foundations of The Reformation of the 16th Century. 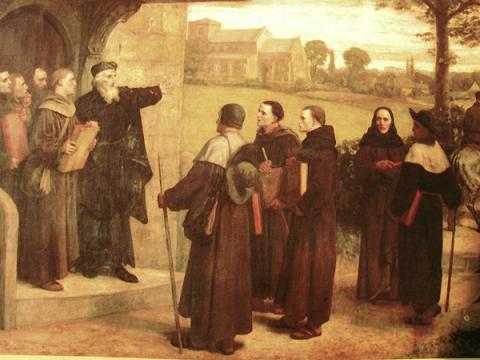