Sometimes known as a "Horseman's Pot", this style of protective head gear was popular among cavalrymen in many European Countries. Seen in the mid-16th Century, it derived from the Ottoman Turkish War Helmet. Known for it's distinctive "lobster shaped" extension (or fluted metal component) - attached to the back. It was designed to provide some aspect of protection for the neck of the wearer. Often made with side-plates attached for facial protection, they were initially effective for stopping bullets (due to the primitive low powder charges common with early first firearms). Many versions incorporated an open faceplate (and a form of Nasal Guard). Versions of the Lobster Tail were popular with many of the troops of The English Civil War. They would stop being used around the end of the 17th Century. 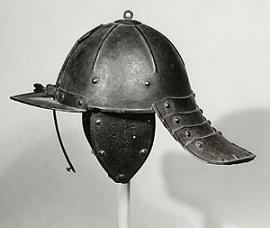