The Livery Collar was an Ancient form of rank or position “identifier” used by Royalty for their Nobles. These were large golden or silver metal chains (and precious stones and jewels) which featured a Crest of either The King or Queen the Official served – of the Office they held. Some Livery Chains were very elaborate. They served as the primary image of one's Official Government position. First used around the 14th Century in England, all Nobles who served as Chancellor, Escheator, High Sheriff or Magistrate worn a “Chain of Office”. It was bestowed in an often elaborate ceremony by their Liege. France also used a form of Chain of Office as well. In terms of Heraldry, they are NOT normally used as a “Achievement”. 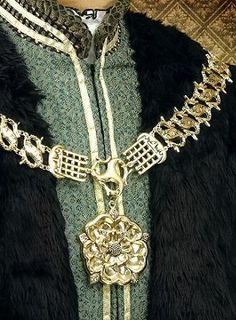