Also known as Wichasa Thanjkala, ''Little Big Man'' was an Ogala Sioux Warrior and ''Enemy'' to Warchief Crazy Horse. The source of their rivalry is not clear, but it may go to Crazy Horse's ''ability'' to ''foresee'' the future of ''His People'' (and giving them several noted victories). ''Little Big Man'' may have felt that ''He'' was a ''better leader''. Born in 1841, ''Little Big Man'' would grow up to be a respected Warrior and local advocate against The US Government. This was more so seen when the infamous ''Laramie Treaty'' was put forth to supposedly keep White Settlers out of Sioux Territory established by The US.

By the time of The Northern Plains War (1866), ''Little Big Man'' supported Crazy Horse (who had similar ambitions to rid their Country of The ''White Man''). He was present at The Battle of The Little Big Horn, and was also one of those Native Americans who ''claimed'' to have killed Lt.-Colonel Custer. Surrendering with Crazy Horse in 1877 (Ft. Robinson, Nebraska Territory) – some claim that ''Little Big Man'' may have plotted against His former rival, by ''assisting'' Native American Army Scouts and Prison Guards in the assassination of Crazy Horse (bayoneted while trying to ''escape''). While this has never been conclusively proven, many Sioux believe it so.

Little Big Man was released in the 1880s and went into ''Reservation Life'' with no further problems to The US Government. He worked with William ''Buffalo Bill'' Cody and His Wild West show for a time. His exact date and location of death is unknown. 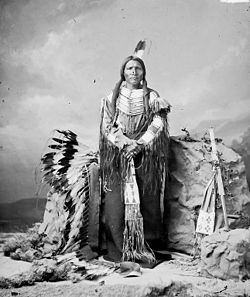