Possibly the first “known” form of “Armor Plating”, the process that created this Ancient Greek Armor was unique. Although no known example have survived, it's “creation” was well chronicled and is still seen on many Ancient Vases and Mosaics of the Period. Linothorax (a combination word combining Linen and the Upper Body of the Wearer), involved strips of thick linen. Cut to need, and average strip was around 5 to 6-inches. Layer upon layer was cut and placed in various patterns (which would form the shape of the Chest and Back.

The strips were coated in an animal fat “glue”, which while pliable – was shaped to suit. Upon drying (and hardening), The Linothorax was completed. Extremely strong (with as many as 10 layers), The Linothorax could withstand sword strikes and blows quite well. Decorated (painted and embellished), in time – small thin iron or bronze “plates” were attached to the bottom. Hanging free, they formed an early Pteruges (or groin protection). This pattern was also duplicated on the upper shoulders (to protect the upper arms). A major drawback to The Linothorax was water. Excessive exposure to such would undermine the “glue” (and therefore strength). 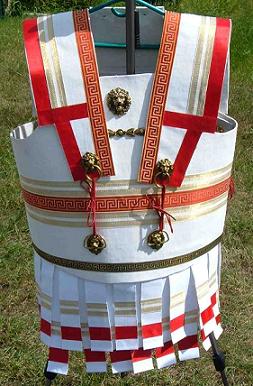