The Line Formation was the standard formation used by Armies to arrange infantry for (and in) battle. This formation was effective for the application of the Volley Fire technique. It did little to prevent cavalry assaults. An Infantry unit would a "line of battle", by placing several ranks of troops - one in front of the other (facing the enemy). Each rank was approximately "one arms length" from the others front. This was necessary to accommodate the length of the previous ranks rifle (the exception being the front rank). Supervised by Officers and Non-Commissioned Officers, troops were constantly drilled to be able to form this position (both in and out of battle). The last rank of a typical line (17th/18th Century), would be filled with NCOs - armed with Pole Arms or Swords.

They made sure if a soldier was firing high (or improperly), they could "tap" him to correct fire. They also served to ensure no one ran in battle (from fear). Several downfalls to Line Formations were advancing into a wooded area (which would break the cohesion of the line) and cavalry attacks. The use of Line Formations diminished with the improvement of artillery (rifling). There are modified and limited applications of the Line Formation still used in Modern combat. 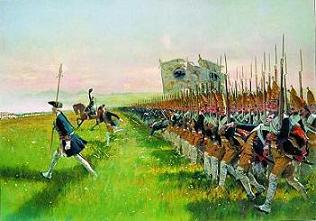