An Ancient Title which was first devised in Rome’s Kingdom or Monarchy Period – The Lictor were Men tasked primarily with the protection of The Magistrate. Originally culled from The Plebeian Class, with time -retired Tribunes could hold The Office. Requirements of being “Tall and Strong”, were placed first. The Lictor would always be present when The Magistrate was performing his duties. In most cases, as many as 12 Lictor were used. They often formed “Corporations”, and were afford great prestige within Rome.

Lictor were identified by a particular “Badge of Office”, called The Fasces. This consisted of a bundle of wooden Rods, into which was placed an Axe (or Labrys). The meaning of The Fasces, was simple. As with one Rod (which could be broken), many together could not. This had connotations of “Unity and Strength”. The Axe was Enforcement of same. The Fasces was always carried on the right shoulder of a Lictor. The were bound in red ribbons or leather.  Lictors could also dispense punishment, based on the ruling of a Magistrate, providing the Offender was a Roman Citizen. Additionally, based on the Roman Official (Quaestor, Prefector, etc), he may have his own Lictors as protectors. This was common in The Roman Republican and Imperial Eras. By way of modern comparisons, The Lictor was akin to a Court Official such as a Baliff or Marshal. 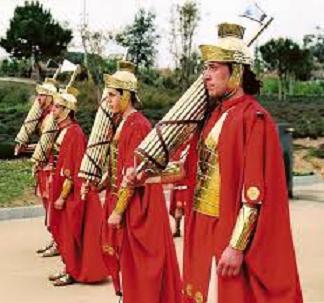