Developed initially by Illyrian Pirates (and later adapted by The Roman Navy, 2nd Century A.D.), these vessels were small fast attack ships. Ideal for patrols and raiding, Liburna Ships were around 100 to 115 feet long and 16 feet wide. They comprised of 18 Oarsmen (with a Main Mast for wind propulsion if needed). Liburna's were said to make 7 knots per hour. Other versions were said to feature up to 25 Oars. By the time Roman adopted The Liburna for their uses, they had added a small iron prow (for ramming). 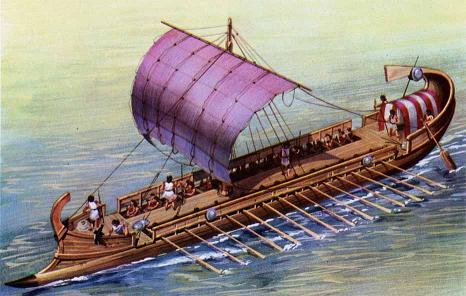