A Letter of Marque was a Government instrument that authorized an illegal “Pirate” to raid under “Authority” of the Government from which it was issued. This changed the title of such “Sea Wolves” to that of “Privateer”. Now legal, “Privateers” were actually a vital part of many Navies (and many Wars) of the 16th through 18th Centuries. Privateers increased a Countries Naval forces. They also increased Royal coffers by the “prizes” they took. Often, a set schedule was set for the percentage of what The Government and Privateers received. Ships (for the most part), were kept by the Privateer (thus increasing his Fleet and power). Treasure and monies were split (in accordance with established “Shares Law”. Privateers did become wealthy (as did their crews). Often many “Royal” Seamen would desert and join a Privateer for the money they could make. However, once a Letter of Marque was withdrawn (usually signaling the end of hostilities between Countries) – all raiding activities were to stop. Continuing to raid would reinstate one as a Pirate (and wanted). Often, former “infamous” Pirate Captains (and their crews), would receive Royal Pardons with the surrendering of their Marques. Many took the offer, many fell back to their old ways (for the money). 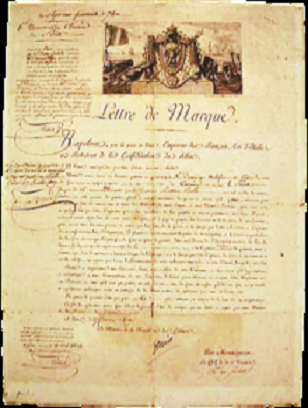