Translated to mean a Roman Military Officer equivalent to today's General Staff Officer, the position of Legatus often had Senatorial Rank as well. The Legatus was "higher" than a Tribune, but subordinate to a Proconsul. Normally drawn from the Officer Class of The vaunted Praetorian Guard and other Roman Elite Military Services, The Legatus commanded an Army in the field. As such, they could (by Roman Law), was entitled to the larger share of captured Enemy goods. In this way, The Legatus recieved his pay (or increased his fortunes).

Some Legatus could be promoted to Military Governorships. This was based partly on their leadership skills in battle. It also was based on their "connections" in Rome politically. The Emperor normally created a Legatus. They were often seen as The Emperor's most trusted Allies.This was also a wise move for an Emperor. The Legatus commanded vast Armies that, if he was so inclined - could wrest control from an Emperor  (as seen in the many early Roman Civil Wars).

The Legatus wore a very distinctive Helmet to identify him on the field. He also wore a knotted Red sash (giving rise to the much later used Officer's Sash which would adopted by Field Officers as a "badge of Rank"). Much later, in both the later Roman Empire as well as it's Byzantine "off shoot", a Legatus evolved into a Diplomatic position, still representing a Ruler in "word and authority". The Title still exists today in this fashion, among The Vatican Diplomatic Corps, as a "Papal Legate". 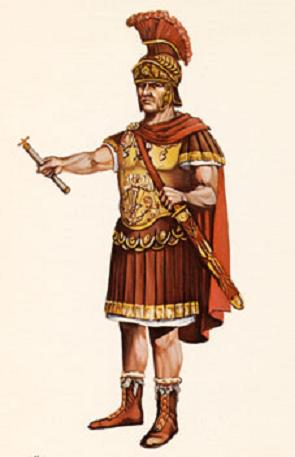