Leeds Castle is near Maidstone, Kent, England. Some type of the fortification has occupied the location since 1119. It came under Royal control in the 13th Century to King Edward I. Originally a Norman stronghold, it may have started out as a Motte and Bailey system. It is thought that originally there was no island or Moat and that Edward I had the perimeter flooded from the nearby Len River to created the "island Moat" that is known today. Accessed from "the Mainland" via an extension walk connected to a Gatehouse, this served as Leed's primary access point. Edward I put much monies and efforts into turning Leeds Castle into a residence.

Leeds was one of the few Royal residence's outside of Windsor Castle - that were actually used by Royalty. During The Baron's War, Leeds was captured by the forces of Edward II (after a short siege). Anne of Bohemia (wife of Richard II), spent the winter of 1381 at Leeds. In 1519, King Henry VIII renovated the castle for his then wife - Catherine of Aragon. Henry also entered into a peace accord with King Francis I (France), from Leeds. In 1552, the Constable of Leeds tool ownership (and lived) at Leeds. The castle escaped slighting from Parliamentarian forces during The English Civil War (although it did serve as their arsenal and prison).

In the 19th Century, Leeds Castle was renovated into it's current Tudor style. In World War II, Leeds served as a burn hospital for wounded soldiers. In 2004, Leeds served as the peace conference site for England and Ireland - to debate and hopefully end "The Troubles". Known for it's world class Topiary art sculptures - it can be visited by the Public. 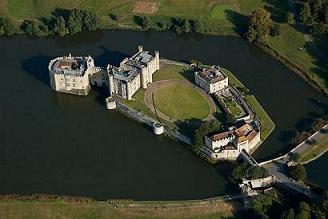