This 15th Century artillery piece was NOT as it's name implies (exactly). With the advent of more and more cannons on Medieval battlefields, many different type of experimental weapons were attempted. With the majority of Medieval cannon being quite large and heavy, their effectiveness was cancelled out by their lack of mobility. Many were not mounted on mobile carriages. An ingenious weapon was tried called The Leather Cannon. In reality, the weapon was a thin copper tube which was wrapped (coiled) with heavy ropes. Over these ropes, sheets of leather were fitted. Although an extremely light and mobile weapon - that was all it could ever be. As was soon discovered, with several shots fired - the copper barrel would become extremely hot. Without proper cooling, the barrel would begin to burst (causing injury and death). Even if the barrel was allowed to cool, the heating and cooling would cause stress fractures in the barrel (with the same casualties, if fired). Normally seen in the 3 to 5-pound varieties, this failed attempt did establish that lighter and more mobile artillery pieces could be constructed (and would be). Leather Cannon nonetheless were used in several engagements of The English Civil War and The Jacobite Rebellion. 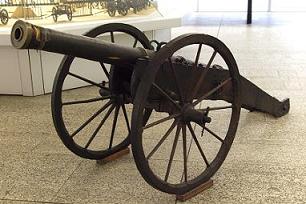