This device comes from the 16th/17th Century. Developed in Italy, it saw little service outside outside of Italy (with an exception in Switzerland). The device combined a Buckler Shield, a Lantern, A Sword and a Dagger. It also featured a Plated Glove. There are several variations known (and documented to have existed). The Dagger also served as a hook to hang a Lantern (from the outside of the shield). The "other" weapons were used as needed. The Lantern Shield became popular as a dueling weapon (so Duelists could fight in the early morning when light was low). In combat, they were only marginally effective. 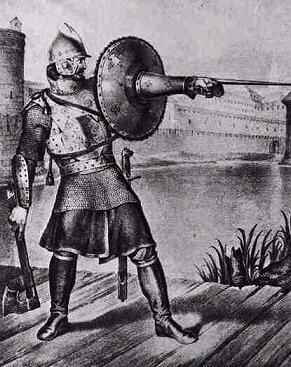