The term ''Landed Army'' is associated with The Grand Duchy of Moscow. Considered the first form of ''Kingdom Government'' after the establishment of The Kievan Rus (Federation), in the 15th Century AD (and the last of it's type, replaced by an Imperial System in 1721 AD). As a Kingdom, The Grand Duchy needed an Army for not only self-defense but (at times) self-survival.

Estimated by Historians as being a number of close to 50,000, The Landed Army. However, Russian Rulers were wise enough to spread this Force out, throughout The Kingdom. This would take time to recall a Force (and lessen the possibility of a Coup). Russian Rulers could best hope to form only 10,000 at any time.

Between 1598 and 1613, The Duchy fell into a Period known as ''The Time of Trouble'' (an internal struggle for power with The Monarchy), many of The Boyar Nobles began to withdraw from their pledges of loyalty. As such, they began to dissolve their Forces, maintaining only a small Militia for self-protection. This signaled the end of an organized Army until the establishment of Imperial Russia. 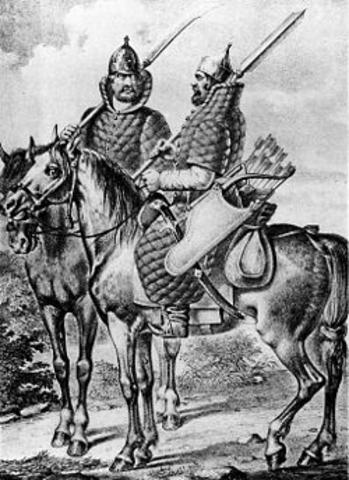