Named by 19th Century Archaeologists for the combination of several forms of protective armoring, the style of a Lamellar War Helmet goes back as far as late Rome (2nd Century AD). The type would continue as a dominant armor type, well into the 5th Century AD (in use by The Lombard Peoples). The basic design involves the creation of an interior ''skeleton'' made of bone or wood – to serve as a frame. These frames were often heat treated for hardness (or not). Following the ''Conical'' and Greek Phyrigian Style – armor makers would begin to apply pieces of hardened wood, bone and later thinner brass plating. The plating would be placed completely around until a solid ring was formed. These sections were wither riveted or ''glued'' into place.

Subsequent patterning was applied to other levels. Each level overlaped to some degree, until the Crown was reached. Normally a type of Cornet Cap was installed. To this was often applied embellishments. This paneling proved very effective in combat. The application of a Nasal Strip as well as Face and Neck Mail (or Cheek Plates) was very common as well. 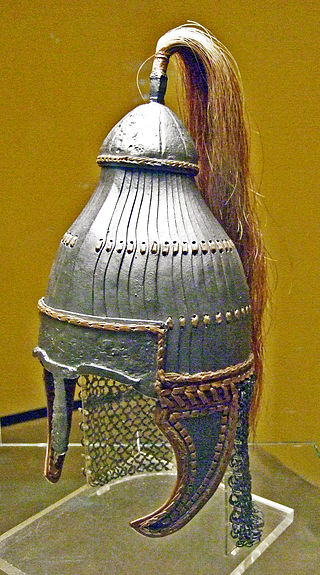