First documented in 1406 (with it's exact construction date unknown) - Laiuse Castle was built by The Order of The Livonian Knights. As one of their many strongholds, Laiuse was an early attempt to construct a fortification that could withstand the early advent of gunpowder. When The Livonian War broke out in 1558, Russian forces invaded the region and captured the castle. They garrisoned it (destroying the few remaining interior structures when they left).

Again seeing action in 1700 with The Great Northern War, King Charles XII (Sweden) - established his Winter quarters at Laiuse. Long since fallen into complete ruin, the only surviving documents of the castles original shape and structure - comes from a 16th Century Russian survey map (done during their occupation). The castle was rectangular (more or less) in shape. 4 large defense Towers were located at the principle wall perimeter points. From the 16th Century map, there appears to have been an earth embankment built completely around Laiuse (as an added form of defense). Only a partial defensive Tower (and some small sections of wall) have survived. The ruins are located in Laiusevaijla, Estonia. They can be visited by the Public. 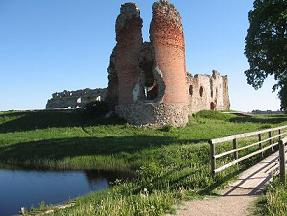 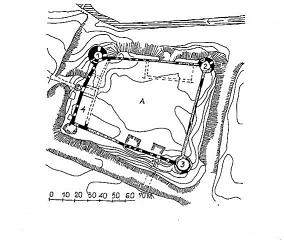