A Germanic development in early fortifications, Laagers were wooden wagons (sometimes specially designed for such), that could be rolled into a fixed position – and used for defensive and offense measures. Often multiple Laager's would be placed into positions (often circular – but “squared” formations were known to be used). Examples of Laager Forts are documented as far back as 119 B.C. In Ancient China. The Laager reached it's peak development in The Hussite Wars of the 15th Century, when they were specifically made with plates of armor. A “Crew”, consisted of 18 to 21 soldiers. Assigned Drivers carried Pole Arm and Archery troops. Often fire was employed as a countermeasure against The Laager system. Designs were said to around 25 to 40 feet long (often requiring many horse or oxen to pull the weight). The design would be seen again in The Anglo-Boer Wars of South Africa (used with great effect by Ditch Rebels against The British Army). 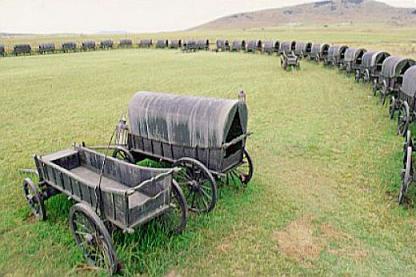