Derived from other popular Cavalry Uniforms of The Era, the 18th Century Kurtka Coat wad popular with Polish and Russian Cavalry Units. The design pattern was based on a contrasting piece of front fabric. This piece was framed in brass buttons. Other versions featured single and double rows as well. By the 19th Century , The Kurtka Coat had spread from Eastern and Central Europe  (still retaining it's Hungarian translation of “Short Coat”) – and became very popular with The French during The Napoleonic Wars. Although considered a Cavalry Uniform, some Infantry adapted a version as well. The Kurtka was made of heavy Linen or wool blend. The basic design remained well into the 20th Century, although by thus time, it was mostly a Ceremonial Uniform. 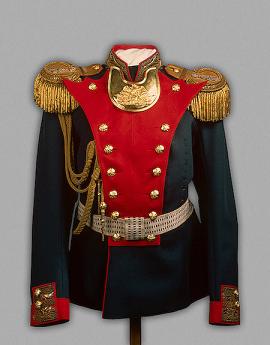