Located in Horns, Syria - Krak Des Chevaliers is one of the most noted and impressive Crusader structures still standing. A hilltop castle, it was initially a Kurdish settlement prior to the 11th Century. It has been speculated that a smaller fortification or castle may have also occupied the site. All evidence of it's existence had been removed by Crusader engineers. Also known as "The Castle of The Kurds", it fell into Crusader hands (Raymond II) in 1142. He in turn gave it over to The Order of Knights Hospitallers. Immediately, they set about the work of rebuilding and reinforcing the structure. This work was completed in 1170 - just in time for one of many moderate earthquakes that would strike the region. So much so in fact, that Krak was constantly being rebuilt and repaired.

By the 13th Century, Krak was now a concentric design fortification. It also saw the addition of it's now famous curtain wall perimeters - surrounding it's entirety. At the height of Krak's significance, she garrisoned 2,000 troops. Many battles and skirmishes were based from Krak. Unfortunately by the 1250s, The Order began to lose many engagements and lost much ground in the region. So much so that their rule of the area would come to and end in 1271. Mamluk Sutlan Baibers began a 36-day siege of Krak des Chevaliers - and took it. Krak would slowly revert back to it's original use as a home to local villagers. In 1933, the French Government undertook a massive relocation of peoples from the Castle and even more expensive renovation of the fortification (stopping because of World War II). Currently, some 9,000 people live in and around Krak.

In 2011, as a result of The Syrian Civil War - Krak was attacked by artillery and mortar fire. It received moderate to heavy damage (but has yet to be fully investigated). 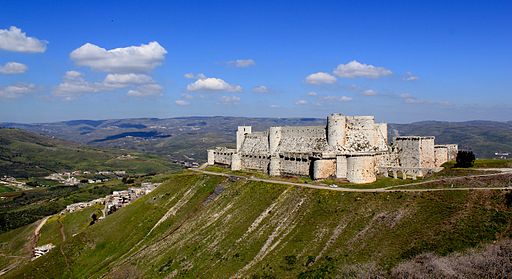