Many Nations claim that a concentrated Proto-Indo European Warrior Class existed, known as The Koryos. Their name is recorded as far back as 4,500 BC – and may be among the first examples of ''Shock Troops''. Most Cultures that claim The Koryos, state that they were a Warrior Society – perhaps on par with Ancient Lacedaemon (Sparta). All Male Members of The Class joined at 18 and served until 35 (providing they lived as long). Several accounts of these Warriors state that they fought in the nude, but others that they work the hides and heads of a Wolf. This was seen as an early example of psychological warfare. Swords, Spears and Bow and Arrow were the norm. Shields were not so. The Koryos ethos was a familiar one. It was thought a great honor to die in battle, as was – if one survived – to bear the multiple scars of One's encounters with an Enemy. The Koryos may have been the template for The Norse Beserkers as well as the aforementioned Spartan Military Code. 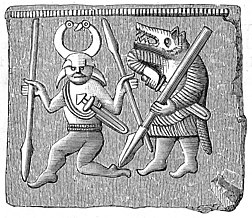