Another in Medieval Korea's varied collection of Pole Arm fighting weapons, The Woldo Spear was an Infantry seen in the mid-16th Century. The name ''Woldo'' is translated to ''Moon'' or ''Moon Blade'', This was for it's distinctive and flattened blade and more so for it's unusual width for a Pole Arm. The Woldo was also unusual in that traditionally it's Pole Staff was considerably shorter that a traditional Pole Arm or Spear weapon.

These Poles were 3 to 4-feet in length with a width of 3-inches. The Blade Head was 4-feet in length and recursive. The Tip was often slightly blunted and flattened. As such, more emphasis was placed on the cutting portion of the Blade.The top portion of the Blade was not sharpened, but did often feature a small notch or extension. This was commonly used to snare clothing or Mail Armor.

The Woldo was used in Southern Korea by The Hwarang Warriors. They developed their own tactics and techniques for The Woldo deployment in battle. Normally, only Warriors of demonstrated Martial Skills were allowed to train with and carry The Woldo. It was considered a ''close quarters weapon''. By the mid-18th Century, The Woldo was adapted for use by various Hwarang Cavalrymen. Ut was used very much the same way as a European Cavalry Sabre was. By this incarnation however, The Woldo was given an extension handle, which assisted a mounted warrior better. 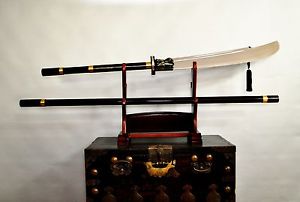