These weapons were among the first battle blades of the early Korean historical Period known as The Three Kingdoms. These weapons began to be made around the 3rd Century B.C. (up to the early 6th Century A.D.). Robust, slender (yet very strong) – on average the blades ranged from 35 to 45 inches long. Single-edged, they featured no type of wrist or hand guard. Handles show influence from both Chinese and early Japanese influences (and increasing the swords length an additional 6 to 8 inches). Seen originally as a symbol of Royalty (and Nobility), the Hwandudaedo Sword was carried in a plain wooden (and treated) scabbard. These blades were also known for their intricate handles. Another feature of the Hwandudaedo was the extremely elaborate pommels. Raised, they often featured full relief carvings of animals or in some cases Family Crests or Royal symbols of identity. The name translates to “Ring Pommel Sword”. 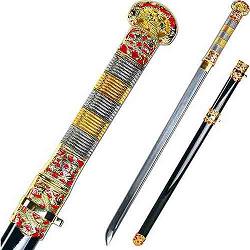