Developed in the 13th Century, The Hwacha was an early weapons system firing platform.Made of wood, the device was mounted on wheels to allow transportation by either animals or humans. A large wooden box was installed on a flat panel board (rearward). The box was hollow and had dual panels with holes through it. This was to facilitate the placement of up to 20 large arrows (ranging 4 to 6 feet in length). The ends of the arrows extended from the bottom panel of the box. These were "connected" by a series of timed fuses. The tops or arrowheads were of traditional design - but we're fitted with large bags of gunpowder. On some occasions, crude shrapnel was also placed in the charges. In theory and practice, The Hwacha was placed into position with Gunners lighting the rearward fuses. The arrows fired simultaneously. This created a "rain of fire and death" upon an enemy. Although misfires were common. The Hwacha was documented as being fairly effective as both "psyops" and basic siege weapon. 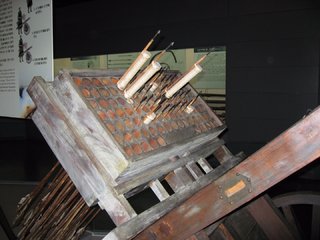