Developed around the 17th Century, The Dangpa Spear was similar to The European Military Fork is design and use. The Spearhead featured 3-prongs. The center prong was flattened and knife-like in appearance. This was the primary cutting/stabbing component of the weapon. Double-edged, it extended some 8 to 12-inches. Surmounting on either side, the 2 matching prongs were desginged to curve slightly outward. Traditional models show these prongs were also flattened and knife-like. They however featured a single-edged, outward blade end. Some later variation have the double prongs more spike-like. The wooden shaft was around 6 to 8 feet long.

The Dangpa was another Pole Arm weapon that saw service in Guard and Ceremonial duties and with foot soldiers. The weapon sometimes featured various “distraction cloths” (of different types and materials), attached to the bottom end of the Trident base. The Dangpa also featured the traditional spiked end (also used as a stabbing and trusting weapon). Per contemporary sources, a “kata” technique of some 22 movements were used to properly deploy The Dangpa. 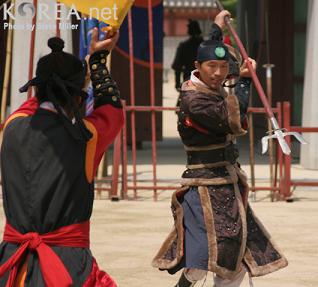