The primary weapon of Poland's Winged Hussars, The Kopia Lance was much different than the traditional European War Lance. Designed to be long, to allow for "distance contact" with an enemy, these Lances ranged from 15 to 25-feet in some cases.  Made from Firwood, The Kopia was constructed of two halves of hollow wood (sealed by glues). An opening on the shafts top, allowed for the Spearhead (made of iron), to be fitted. The most common feature of The Kopia was that they were brightly colored by paint. The hollow design was a practicality. The construction allowed for the weapon to break off, thus preventing a Hussar from getting snared himself. This design also allowed for maximum damage upon impact. Spearheads were of varying designs and most often double edged. On average, a Spearhead could range from 8 to 12-inches.

Another innovation was a protective hand coveting get known as a "Galka". Located some 3/4 in distance from the end of The shaft, it both protected the Users hand and served as a "counter balance". The Kopia Lance saw service from the late 13th to 16th Centuries. In addition to, Hussars also used a much smaller Lance/Spear weapon called a "Kopijka" Spear. Much smaller at 4 to 8-feet, they were constructed more along the lines of the standard European Spear and Lance. Solid and made from Ash or Oak woods, they too featured a 8 to 12-inch Spearhead. The Kopijka Spear was considered a "2nd Rank" weapon, used for secondary or finishing maneuvers after the "1st Rank" had made initial contact. This type saw service from the 14th to 17th Centuries. 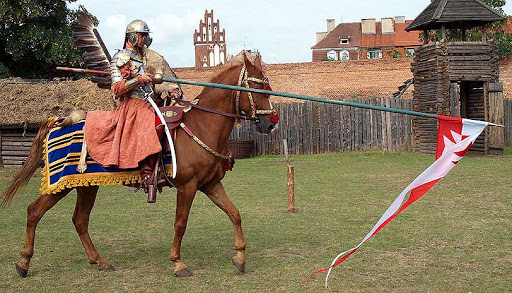