A Major component to 1st & 2nd Century BC Macedonian Cavalry  (of both Light and Heavy varieties), The Kontos Lance was in many ways, the first of Cavalry Lances invented. Made of Acacia wood, they were "fire" hardened to increase their strength. They ranged from 12 to 25-feet in length. Designed to be carried in the "crook" of the Right Arm. This was for stabilization. The Lance Heads were constructed of Bronze, and weighed 2-pounds. This gave the overall length of The Kontos Lance of 15 to 20-pounds. Able to be used several times, if they did break, Riders often "split" them free with their Sword. Most Macedonian Cavalrymen were allocated as many as 4 Lances (although only one could be carried at a time). 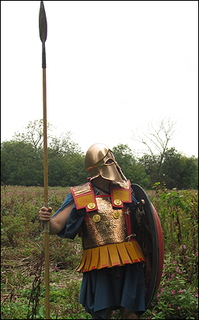