Not an actual title (despite many claims), the term “Knight Errant” was originally a Medieval literary device to promote a specific character (in a book or play), to perform “knightly duties” often with a romantic and dashing flare. Knight Errant's were considered “wandering and roving soul's” (almost always a young and idealistic Knight). They were often motivated to perform their “actions” in the name of a Lady (or Damsel). Written to be the embodiment of virtue and chastity, these Knight Errants became the template for many historical legends. Much of the later “Arthurian Sagas” of Medieval England perpetuate this literary form. Some notable “names” are Lancelot, Gawain and Perceval. One of the more famous of “Errant Quests” would be The Holy Grail stories. Often promoting a heavy sense of duty, honor, bravery, etc. - these stories served a purpose (especially for those who could read). 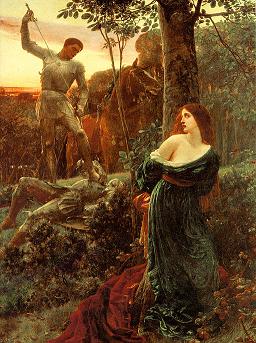