This was the highest level a Knight could achieve in The Middle Ages. A Knight Banneret could be a man of great “renown” under personal service to a King or Queen. They could also be a “normal” Knight who had distinguished themselves with bravery on the battlefield. A Knight Banneret was permitted to lead troops on the battlefield under his OWN flag. Lesser Knights would carry a Pennon Flag. Part of a Knight Banneret ceremony involved the removing of the tails of The Pennon and thus making it into a “square shape” or “banner”. 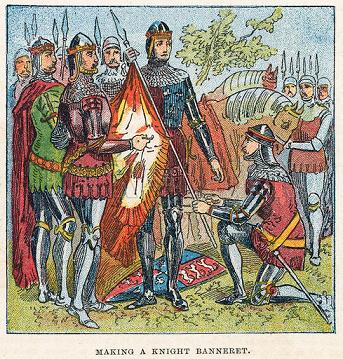