Kirtel's were dress styles popularized in the 16th Century (Germany). Used by Commoners and the emerging "Middle Class". The Kirtel was a long, one-piece dress. Worn over the head and down the body, they had no back lacing. Made of Coarse, Linen or Wool (depending on season), they featured extra long sleeves that extended well beyond the wrist of the Wearer. The sleeve sides were open and cinched to fit by lacing. Kirtel's were worn over an "Inner Dress" or Slip. The Kirtel became popular throughout most European Countries at some point. 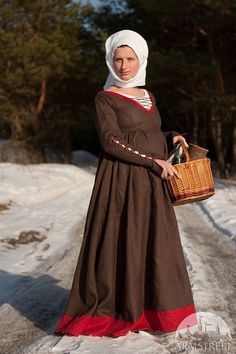