No more “celebrated” Monarch in English history is known more as was King Henry VIII. Born in 1509 to King Henry VII and Elizabeth of York, Henry inherited his crown by being the only member of his father's issue still living (having lost an older brother). Despite what Henry VIII would later become, he was a handsome and athletic young man. He was a talented boy who was an excellent horseman, crack Archer and above all – had an enormous sense of humor and fun. He was a Writer (Plays and Poems), and was somewhat skilled in playing and writing music. Very well educated, he spoke 4 languages and had a keen interest in Theology.

When he was 11, he entered into the prearranged union between Catherine of Aragon (his dead brothers intended). Catherine was 23 years old. Henry did this possibly more so the requirement set by his late father (The King). Also, even at 11 – Henry was aware of the precarious situation England was in with the much more powerful Spanish Empire. England needed strong allies. As time progressed however – the relationship that his father and mother developed into, did not bear the same fruit as Henry and Catherine. Neither really loved or cared for the other (it really was a political marriage). After an issue of 6 children (of only 1 reached maturity – Mary), Henry (and England) – needed a Son.

Henry spent his time reconciling with England's “past enemy” France. He spent large amounts of monies courting French Diplomats. Henry also began to revamp and develop a better Naval Force (seen as a necessity for the future). Henry also set about building many fortifications and renovating many ancient Castles throughout England (again for possible future defense). He even began to press for (and get) firearms firmly entrenched into his military. Henry also spent funds to construct the Palaces of Whitehall and St. James (in London). All set about with a flair for the spectacular (a possible inheritance from his likewise minded father). Henry also “upset the apple cart” of The Aristocracy. He began to “promote” Lower Lords and Gentry into higher positions within his Court (something that was normally not supposed to happen). Henry further championed his Catholic Faith (so much so that The Pope in Rome bestowed upon him the title “Defender of The Faith”). Henry's wife Catherine was now well into her 40s.

Henry never cared nor loved her. He began an affair with Elizabeth Blount (Daughter of The Duke of Richmond). This yielded a Son (but illegitimate and unable to be claimed). Henry next fell in love with Anne Boleyn (Henry had an affair with her sister previously!). However, Anne had morals. She refused to share his bed unless he married her. This “act” will set into effect a series of actions which wil change the course of English history.Henry was legally married (and ordained as valid by The Pope in Rome). Divorce was seldom (if ever granted). Henry began the process of “diplomatic pressure” leveled at Rome. To be true, Henry began to champion Catholic causes at home in England, but still “friendly threats” were needed. Using an old Biblical “loophole” regarding the marrying of one's deceased brother wife as being “unholy”, this should have been the trick. Unfortunately for Henry, THIS Pope was “controlled” by The Holy Roman Emperor Charles V (who happened to be Catherine's Nephew!) The Pope refused. The two were secretly married in England. Declaring Anne his “Queen”in 1533, earned Henry an excommunication from The Pope. Henry (and his very politically savy Privy Council) – created The Act of Supremacy in 1534. This Act established Henry VIII as Supreme Head of “Church and State”. As such, Henry “created” his own Church (Anglican). Declaring Catholicism outlawed, he set about seizing all Church property (and funds) – for his own. “Temporal War” was declared on Henry (and England). Now “Master of The House – truly”, Henry was faced with yet another problem - Anne.

Still no (survivable) male heirs. only his daughter (named for his mother – Elizabeth), seemed to thrive. So Henry contrived a charge of treason against Anne (incest with her brother) – and she was tried and executed.Henry next moved onto Mistress Jane Seymour. While enjoying his new “Queen” however, the powerful Catholic Nations began to array for war against Henry – for his nerve and denouncing The Faith, and setting up his own Church! This was made ever so keenly known when Henry allowed 200 Catholic's to be tortured and executed under charges of sedition.Jane (his Queen), did “her job” (according to Henry) – and gave birth to Henry's “only” legitimate son Edward (VI) (He only lived to 15 and died of the now famous “Tudor health Curse”). Enter Anne of Cleves. Henry was sent a painting of her and he fell in love at first sight. Unfortunately for Henry, the Artist brush can be too faltering. Henry found her ugly in real life.

She was soon divorced from him. Henry by now was overweight. Drinking and eating too excess had finally caught up to his being. Hardly able to move from one side of The Royal Court to the other, he argued constantly – threatening execution to anyone that disagreed with him. It was said that The Privy Council really ruled England in his last few years.It was in these final years that Henry married yet another. He married Catherine Parr. He was 48 and she was 19. Being too young (and not well versed in Court intrigues) – her lighter and amorous intentions to younger male Courtsmen – ended up with HER execution as well. By 1544, Henry had for the most part – given up on the idea of a male heir. By right, Mary (his first born) would be Queen of England (followed by young Elizabeth, if needed). He married again – one Catherine Howard. By this time he was mostly bed ridden from his weight and an ulcerated leg.

Although considered “unbalanced” and “tyrannical” by some, Henry never really lost the love of his Subjects – who mourned his death in 1547. And although Mary did indeed rule (briefly) – his younger daughter Elizabeth I was a carbon copy of his iron will and determination to have things his way. 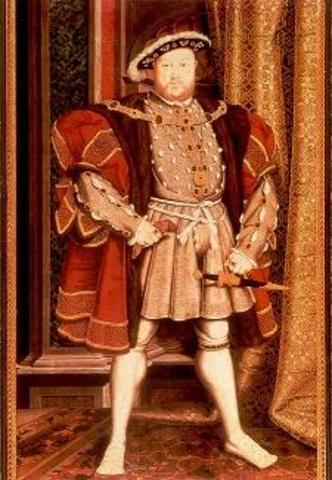