Born in 1485, it is unclear if Owen Tudor ever married Catherine of France. She was 13 when Henry was born. He never knew his father (who had died weeks prior to his birth). Catherine was married off again and young Henry was raised in Wales (in part by his Uncle and partly by The Herbert Family, then in possession of Raglan Castle and later Pembroke Castle). After a series of deaths to possible claimants to the Throne, Henry was left as the only possible successor (in part to his mother's political moves, no doubt). By 1485 (now a young Warrior), he and his “Red Dragon Banner” (with thousands of troops at his disposal), landed in England and defeated Richard III at Bosworth Field.

Next came the eventual crowning at Westminster Abbey as King of England. Married to Elizabeth of York (as a shrewd political move to assure ex-Richard supporters of his intentions), Henry merged “The White and Red Roses” of York and Lancaster finally. Although a “political marriage”, Henry and Elizabeth truly loved each other (she was his equal in matters of politics and Royal Court intrigues). Although the union “officially” ended The Wars of The Roses, there were still those who sought to bring about turmoil initially. Many “Pretenders” came forth (claiming Yorkist succession rights). One, the “youth” Lambert Simnel (who was used as a figurehead for an ill-fated 1487 battle) – ended up alone and serving Henry VII as a kitchen servant. In 1490, another, Perkin Warbeck tried to usurp Henry yet again.

It ended badly for Warbeck (who was captured, drawn and quartered).Henry set about to getting England more stable with regards to “World Standings”. He financed John and Sebastian Cabot on their explorations of The New World (in a mad rush to cash in on the previous Spanish and Portuguese holdings). Henry also built up his standing among his peoples. He held elaborate and expensive Pageants at his Court. He also renovated Richmond and Greenwich Palaces and added more facilities to Windsor Castle and rebuilt The Tower of London.Henry increased the Royal Treasury by half during his lifetime. This was owed to his increased trade relations and increasing England's Merchant Fleet.Henry was a well known Patron of The Arts. He imported many libraries and scholars (and supported many more). He was also a huge fan of sporting events (becoming quite prolific in Falconry and Tennis).Having two sons (Arthur and Henry, The Younger), Henry VII and Elizabeth arranged for his successor (Arthur) to marry Spanish Royalty (Catherine of Aragon).

Unfortunately, Arthur died at 15 (of unknown causes – as most Tudors seem to have a habit of doing). This was a severe blow to both Elizabeth and Henry. Arrangements were made for Catherine to marry the younger Henry. Making matters worse, Elizabeth died suddenly (at 37 years old). This placed Henry into a severe depression. He locked himself away (hardly speaking to anyone – including his only surviving son – young Henry. In his later years, his eyesight had failed. While The Court tried to get him marry again, Henry refused. He became greedy and began to spend much of his “doubled wealth”. He died in 1509 and was buried next to his first born son Arthur and his Queen – Elizabeth of York. 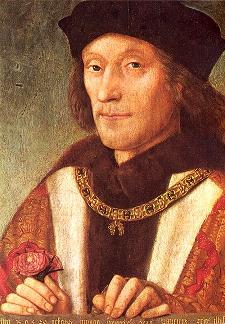