Also known as The “Blue” or “War Crown” The Khepresh was the official Battle Helmet of a Pharaoh. Designed in the 11th Century BC, it was worn exclusively by a Pharaoh or Crown Prince. Made of wood and iron, with hammered plates of oxidized Silver, it was painted in Azure Blue. Typically plain (save for a Golden Cobra, which wound it’s way from the front of The Helmet to the back) – later versions were embellished in Gold. Worn on the battlefield, the Khepresh identified Pharaoh as the Supreme Military Commander. Although not all Pharaoh’s led Troops into battle, those who did would have these buried with them in their tombs (along with with their War weapons). 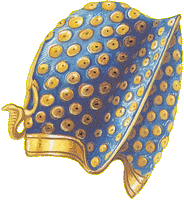 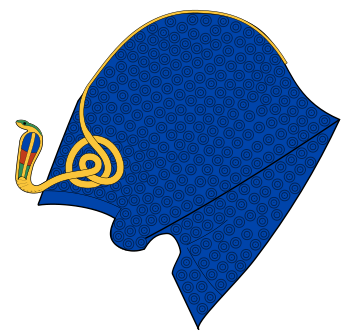